I’m very excited that the first paper from my PhD dissertation is published online. This paper uses ecological theory to ask how interactions between plants and microbial communities in the soil can influence coexistence among competing plant species.

We built our paper around a series of models previously developed by Jim Bever in the 1990s and early 2000s. Analyses of these models emphasized the result that these plant-soil feedbacks promote plant species coexistence when the microbial community cultivated by each plant species is more harmful (or less beneficial) to the cultivating plant than to the other plant. This happens when the following stabilization term is negative:

We re-analzyed these models using the framework developed by Peter Chesson in his approach to coexistence theory, and showed that the net effect of microbes on plant diversity is driven both by the degree two which they harm or hurt the cultivating plant versus the other plant, and also by the degree to which each plant is susceptible to soil microbial effects as a whole – regardless of which plant species cultivates those microbes. This difference in the average degree to which each plant species is influenced by microbes is expressed as follows:

In our re-analysis of the original Bever models, the stabilization term turns out to be as follows:

What this means is that to accurately assess whether soil microbes promote or hinder diversity, we need to calculate their stabilizing effects via $I_S$, as scientists have been doing for the past two decades, but we also need to compare this stabilization to the fitness difference they mediate. We explain in the paper how this fitness difference can be calculated exprimentally, and my ongoing work in the greenhouse is an attempt to do this.

Comparing the effects of soil microbes and resource competition

A number of studies have shown that these plant-soil feedbacks might operate in natural communities, but an important question is whether these effects dominate the effects of resource competition, which is thought to be a major force in structuring plant communities. To explore this question, we slightly tweaked the original plant-soil feedback models from Bever’s 2003 paper, to model the population dynamics of plant species that are simultaneously competing and interacting via the microbes they cultivate in the soil.

This approach opened up a lot of possibilities, all of which give the general impression that the effects of soil microbes on species coexistence are by no means obvious or intuitive. In fact, the net effect of soil microbes depends on the degree to which the plants compete, how multiple plant species interact with each other in a system with more than just two plant species, and the dynamics of the resources that the plants are competing for. I built a Shiny app that helps explore these complex dynamics. In the App, you can move different sliders around – each of which represents a specific term in a mathematical model – to find out how the microbial effects change with each parameter. 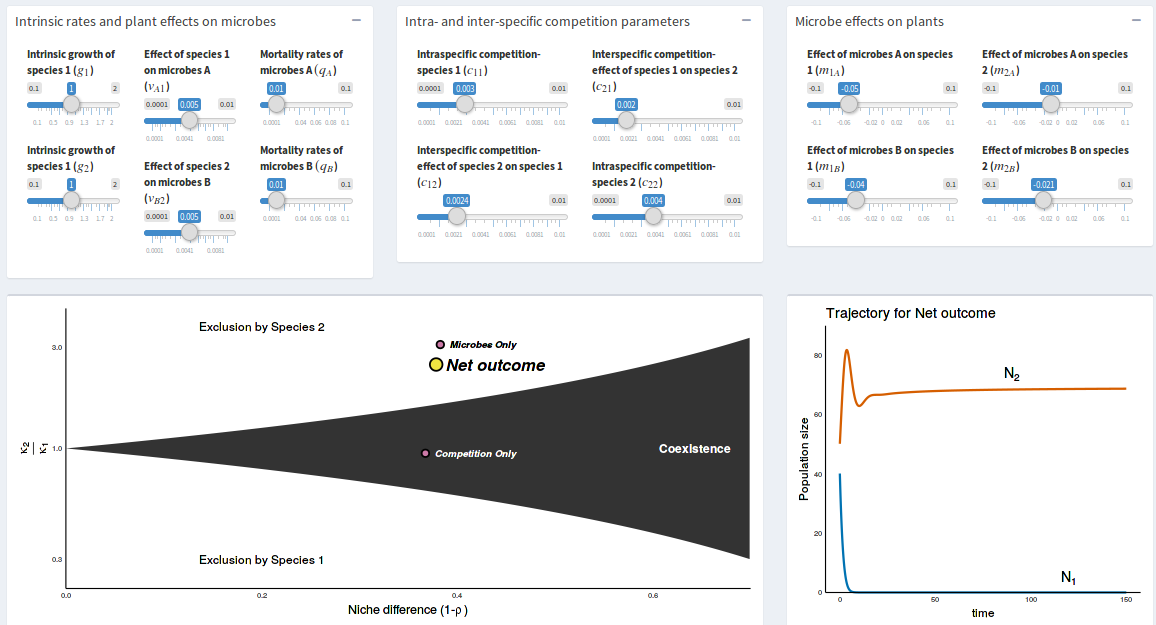 Reflecting on the process

I am very proud of how the paper turned out, and equally importantly, I really enjoyed the process of writing it. The main ideas and figures came about during my stay in Jonathan Levine’s lab at ETH-Zurich. Jonathan and I enjoyed a great collaboration, meeting for a few hours every week to talk through the most tricky sections, brainstorm new ways to express ideas, or revisit problems that we had been stuck on during the past weeks. I also got a lot of help from Chris Johnson, who carefully went through Bever’s original plant-soil feedback models and suggested ways to improve our analysis. It was really valuable to get a theoretician’s brains to help us with this work. Chris’s approach was always very organized and careful (of course, one always tries to be organized and careful, but I feel that theoreticians are masters of this). Xinyi Yan is my undergraduate student at UCLA- she carefully double-checked all of the math in the paper and suggested various analyses that helped me think about our models in a different way. Finally, it was great to have Nathan’s feedback on the text of this paper. He helped organize a lot of the introduction so that the gaps in the existing literature were more clearly outlined, and generally helped me organize my own thinking throughout the process of putting this together. It also helped that as I was developing this paper, I was in a beautiful city surrounded by the kind and hardworking grad students and postdocs in Jonathan’s lab. 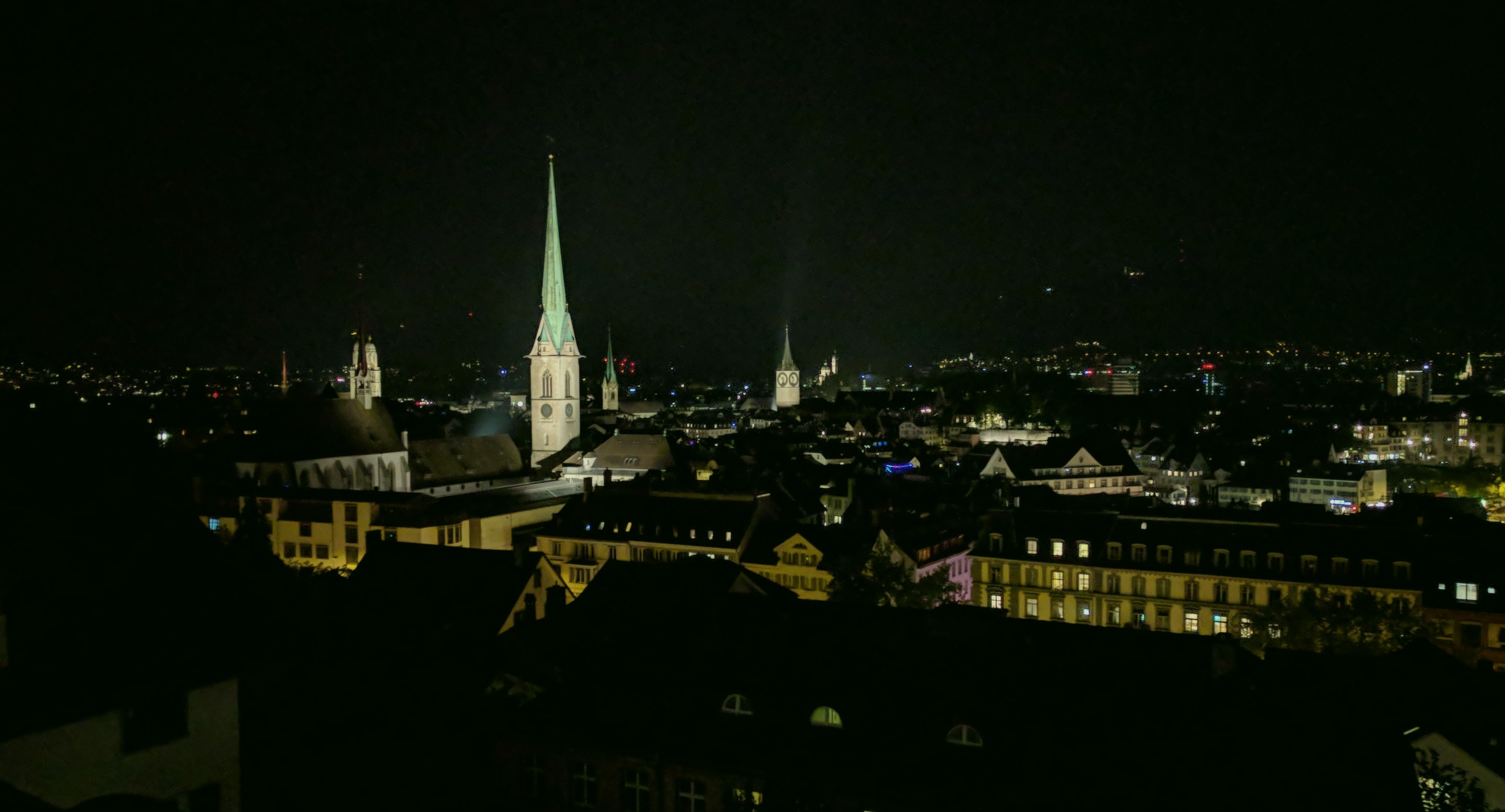 I also am very grateful for encouragement I got early on from my committee member Felipe Zapata and from Jonathan Myers. Felipe had gotten so excited when I described my idea to him before completing my qualifying exams, and was so clearly excited for me when the paper was finally out. Jonathan Meyers might not even remember doing anything from me – but I took a lot of encouragement out of a conversation I had with him at the 2017 Ecological Society of America conference. During a poster session at the meeting, I shared a very vague idea of this project with Jonathan and he said something to the effect of “I think you’re on to something good here, keep with it.” These small comments from senior mentors can have such lasting effects!